The American is one of the UFC’s most popular fighters but in 18 years as a professional has not won a world belt.

Saturday’s rematch with welterweight champion Kamaru Usman at UFC 261 is Masvidal’s second title shot and the 36-year-old fears it will be his last.

“Winning this belt is one of many things on my task sheet before I close this chapter,” he told BBC Sport. 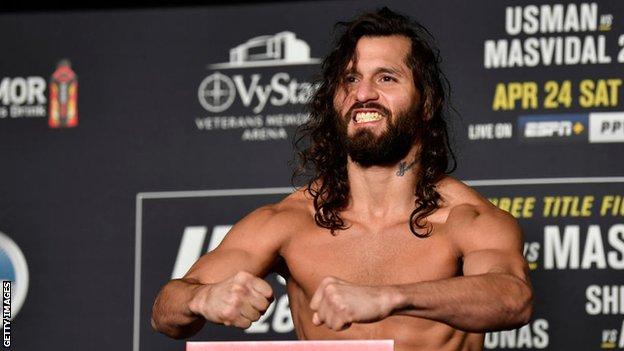 “I look at every fight as my last chance so I’ve got to give it my all, I’ve got to push for what I want. If I want to be a world champion then this is it, I’ve got to go.

“When I came back in 2019, I made a checklist and got many of those things done in 2019. But as far as what I [still] want to accomplish, I’m not going to say everything I have in the booklet because I want to keep everybody in suspense.”

After successive defeats by Demian Maia and Stephen Thompson, Masvidal’s career was at a crossroads in 2017.

But ‘Gamebred’ came back with a bang, producing a devastating knockout to upset Britain’s Darren Till in London before beating Ben Askren with a flying knee in five seconds – the fastest knockout in UFC history.

Masvidal then capped 2019 by defeating fellow veteran Nate Diaz to become the inaugural winner of the symbolic ‘BMF’ belt and put himself in world title contention.

“When I took my hiatus [November 2017 to March 2019], I’d been in this sport a while,” he said. “I had 15 years of data compiled of what works for me. We took that, dissected it and started moving forward with it.

“I still have the same booklet – just a little deeper, a little longer, with more detail – of things I have to do before I move onto the next phase in my life. Until I do that I won’t be complete, I won’t be satisfied.

“In 2019, I talked with my coaches, my manager, about those goals and they were like ‘wow, man. Pretty outlandish but we love it, we’re going to stick behind you’.”

In 2020, Masvidal followed Conor McGregor in launching his own alcoholic brand – of the Mexican drink mezcal – and on Thursday he announced that his own bareknuckle MMA promotion will start in Miami in June.

Masvidal’s fighting roots are in Miami, where he took part in mutual combat street fights from the age of 14, and he is now thinking about the next generation.

“I want to leave a legacy that inspires others, especially people that didn’t have it so easy coming up, didn’t have a silver spoon in their mouth, that have to go out there and get it,” he said.

“I come from a humble place, and the highs and lows that got me here made me the man I am. The money, the fame, the gold chains – none of that matters to who I am in my core, my essence.

“Besides being the most violent person that’s ever stepped into that cage, that’s the legacy I’m trying to leave, that you too can do it.”